We are a Scottish bagpipe band based in Vienna, Austria. The band is made up of musicians from Austria and Scotland, and performs regularly at events in Austria and further afield.

The roots of the band go back to 1997, when a few local pipers met at a European Bagpiping Festival held in Vienna and a small band was formed. In 2000 another Viennese Pipe band, the Samh Dubh Pipe Band, was established. In 2002 members of the two bands began to play together as Vienna Pipes and Drums, under Pipe Major Graeme Hood. The Vienna Pipes Musikverein was registered in 2005.

Since then the band has gone from strength to strength, growing in numbers and ability. Gavin Law took over as Pipe Major in 2015. Gavin brought a wealth of piping experience to the band. He led the band to competition success in Germany and Scotland, established our many popular fundraising events, and setup our ongoing children’s teaching programme. Craig Parker succeeded Gavin as Pipe Major in 2017.

Musical competitions are an important part of Scottish piping, and pipe band competitions are at the heart of any Highland Games. The Vienna Pipes and Drums band has long participated in Austrian piping competitions, with band members competing successfully in many local solo and quintet tournaments. In 2011 the band made the decision to compete internationally, and since then we have journeyed every year to Scotland or Germany to compete in international competitions as a member of the Royal Scottish Pipe Band Association. We competed in Scotland in 2011, 2012, 2015, and 2017. and in Germany in 2013, 2014 and 2016. We were the first Austrian band to compete internationally, the first to compete at the World Pipe Band Championships in Scotland (qualifying for the final in 2017), and the first (and so far only) Austrian band to win an international competition, when we took 1st place in 2014 in Grade 4B in Angelbachtal, Germany.

The band plays regularly at a wide variety of events. We frequently perform for private and corporate customers in and around Vienna. Some of our more significant appearances include:

The band plays a wide selection of traditional and modern Scottish bagpipe tunes. Our current repertoire is listed here.

Since 2006 the band has worn the “Loch Lomond Millenium” tartan, a modern design by Claire Donaldson of the House of Edgar for Argyll Bagpipes & Kilts Ltd. 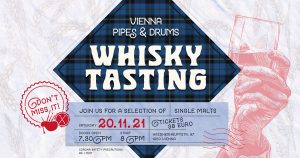